Rethinking language education as a Japanese mom in Vancouver 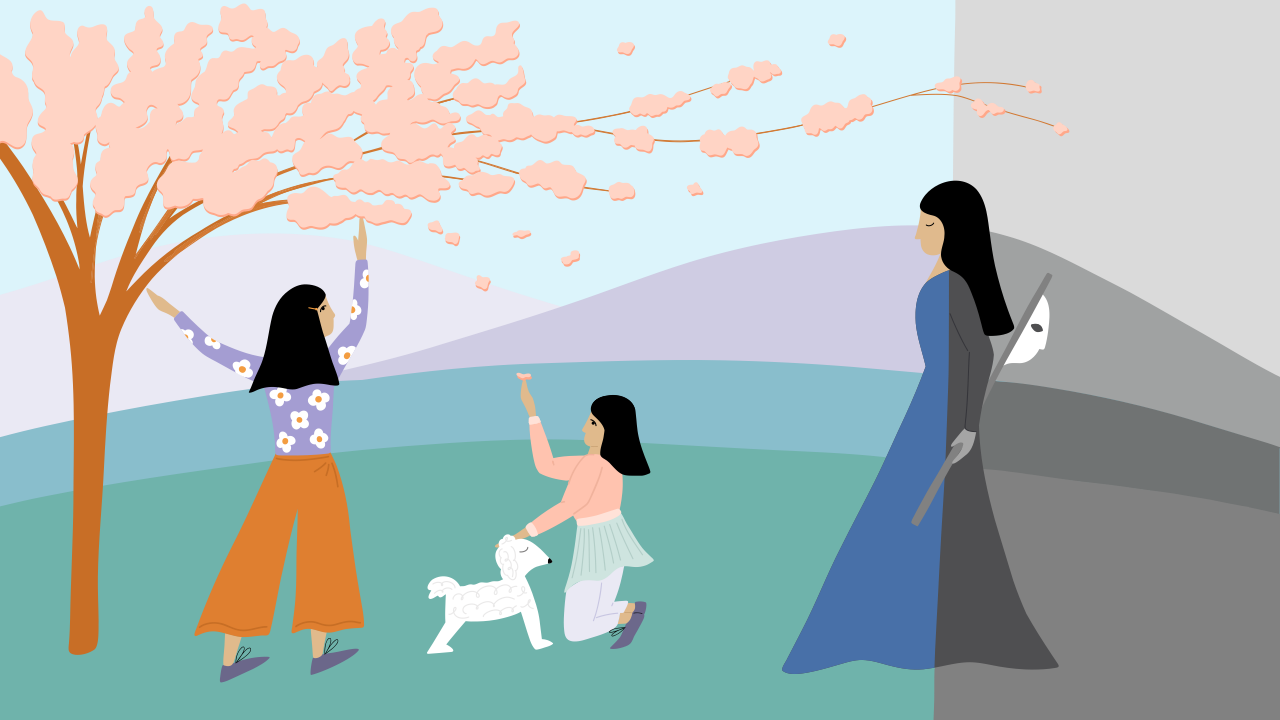 Ai Mizuta critiques language education research through the lens of her experience as a Japanese mom in Vancouver.

As the pandemic rose in 2020, so did anti-Asian racism across North America. In Vancouver, BC, anti Asian hate crimes increased 717 percent during 2020, and more than half of Asian Canadians suffered from discrimination in 2020. Incidents of Asian women and seniors who have been slapped or shoved to the ground being yelled racial slurs while walking on the street became a regular story. When I moved to Vancouver in 2006, the city had a reputation of being the Asia Pacific gateway of North America. In May 2021, a Bloomberg article named Vancouver “the Anti-Asian hate crime capital of North America.”

Let’s be clear, though. Anti-Asian racism has always been present in Canada. It has always been part of Asian Canadians’ lives, especially in Vancouver BC, a province that was built on white supremacy and anti-Asian rhetoric, from the disenfranchisement of Indigenous, Chinese, and Japanese people to school segregation of non-White students, Chinese head tax to the immigration laws that banned migrants of non-European origins, just to name a few. While these explicitly racist laws have been dismantled, the presence of Asian people in Vancouver has still been seen as a problem in the mainstream media. For instance, the rhetoric of “Asian monster houses” and “Hongcouver” in the 1990s reflected discourses of resentment about the wealth of new immigrants, a discourse that returned in 2015, and continues, as Chinese migrants are again blamed for the housing “affordability crisis.”

The pandemic, however, revealed the hatred geared toward Asians in a violent manner, as more people felt justified to show their hate instead of hiding it. When I started to hear about incidents happening in my neighborhood on campus, such as a Korean female student being kicked and punched by a jogger, I became scared of simply taking a walk outside, not to mention speaking Japanese to my children. What if someone catches me speaking Japanese to my kids? It’s not worth risking my kids getting hurt by strangers. I spoke English loudly on purpose, trying to show people how I was not at all a threat.

This “speaking English loudly on purpose” was not a new habit of mine. In fact, this was the skill I acquired over the past decade since I became a parent. I became so good at it, it became my second nature. When my oldest daughter was born 10 years ago, I was doing my PhD in language education at the University of British Columbia. As a bilingual education specialist, I promised myself I was going to raise a bilingual child in Japanese and English following the theories and best practices of bilingual education. However, I have constantly failed myself.

This is embarrassing because before I became a parent, I used to preach to people that they must commit to speaking their mother tongues to their children, no matter what. Many years of studying bilingual education told me the importance of nurturing a strong mother tongue, not only for learning the mainstream language, but also for strong cognition and healthy identity development.

For example, when my older sister was raising her toddler son in Germany, she asked me if it was okay to speak to him in German at a playground. I told her very firmly, “No, sis. You can’t let your guard down.” She went on, “but people look at us, and it could get awkward and embarrassing.” I naively insisted., “Even if it’s embarrassing, you have to stick to it. That’s best for your child.”

Because that was what the research says, and that was what I believed to be “true.” Little did I know that 10 years later, I would drop my Japanese entirely when I took my daughter to a playground at the University of British Columbia.

"Being in the academic field of language education never prepared me to confront racism in my everyday experience of motherhood."

To make sense of that part of my life, I have turned to voices such as W.E.B Du Bois and Frantz Fanon, who have provided me with language to make sense of this experience: A racialized mother who has been trying to “fit in” for her whole life, constantly seeing herself through the eyes of an imaginary white person, which is similar to what Du Bois (1903) called “double consciousness”. Fully understanding and knowing the significance of teaching her kids her mother tongue, but constantly failing because she is too scared to be marked as the social other:; somebody who never belongs here. Instead, I put on my white mask (Fannon, 1952/1967) as I spoke English to my kids, carefully copying how white parents talk to their kids, “Sweetie, we have to leave in 10 minutes.” Honestly, I have become so good at it.

In general, language education is a very white field. This is only “natural,” as the original purpose of the field is a colonial and missionary one—to teach English to the rest of the world. As a result, advice for minority parents and children tends to come from white researchers who speak English as their first language, and who have never had the experience of raising racialized children. As they “study” the lives of immigrants, “discovering” what immigrants have lived through, they rewrite the stories of immigrants from their mainstream white perspectives.

They just don’t get it.

I have always felt the necessity to talk about this kind of discrepancy between research about Asian people and the real experience of Asian people. However, my vague thoughts became an urgent need when anti-Asian racism took its toll in North America in 2020. Incident after incident, it became clear that no matter how much we tried to fit in as we wear a white mask speaking English, working hard to receive “good” education and get highly regarded jobs, none of these mattered from the racist’s eyes. The white mask has failed us and it was pretty much useless. We will still get shoved to the ground just because we look Asian.

If I was this anxious about speaking Japanese, I wondered how other Japanese moms felt about speaking Japanese to their children in public. I posted on social media my dilemma about speaking English to my kids. The frustration of knowing that I am supposed to speak more Japanese to my kids, yet failing to do so because I am too scared of the consequences. Then, people reacted that they felt the same way. One of the moms told me that she was told by a stranger to speak English to her own kids because speaking non-English language was not good for her kids.

When Japanese moms are told such things by strangers, teachers, or sometimes even by their in-laws, they paralyze. They don’t know what to say, and then decide to think it’s our own fault to be treated that way. This particular mom thought that if her English was better, that stranger wouldn’t have said such a thing. Thus, she concluded that it was on her that she created such a situation by not speaking English well enough. I learned that many Japanese moms in North America do not know what to say when faced with such ignorance and prejudice, let alone racism and hatred. So I decided to make a post showing how to respond to strangers in such a situation.

Many Japanese moms in Canada, including myself, are dealing with unrealistic high expectations: To raise their kids for success in mainstream society while instilling in them their heritage language and culture.

This might seem to be a feasible goal if you are white, or even mixed. But when you have a “fully” Asian face, speaking any language other than English will instantly mark you as the social other, and even though you speak English as your native language, you will be questioned “why don’t they learn English?” The truth is bilingualism is encouraged if you are white, but, if you are Asian, you are judged by the English monolingual standards in Canada. Because being successful has been about emulating whiteness, speaking Asian languages would go against that success model.

"Can we have the cake and eat it too?"

This takes some creative thinking, I don’t have the answers yet. Perhaps, it will include deconstructing the meaning of success. It may require getting rid of my double consciousness and it may require burning the white mask. But how? I decided not to sit and wait until I have an answer. I decided to act anyway. Because no previous research will show me the answer, I had to find out by myself. If there was one thing my years of PhD study taught me, it was that the quasi-scientific approach to research did not address real life problems. No predetermined methodology will be useful in my current case. The only methodology is to act. I knew I needed to connect with more Japanese moms to understand them better.

I saw an opportunity to help teach at a Japanese preschool. So I started volunteering there twice a week. I saw an opportunity to write a monthly column for a Japanese Canadian magazine, so I reached out to the editor if they have a space for me to write about parenting. They kindly offered me a page every month. Then, a Japanese mom living in the U.S contacted me on Instagram that she has no confidence in English but she wants to be able to express herself better to her kids’ teachers and other parents. So I started to pilot an English course focusing on moms who are raising their kids in North America. I also took a license to become a parenting coach to navigate Japanese moms’ parenting journey abroad.

I am full heartedly taking in each and every encounter with appreciation, not knowing where it is exactly going to take me. But the only way forward for me is to keep connecting these dots and hope to see a constellation one day.

Ai Mizuta wears multiple hats as a mother, wife, writer, parenting coach, researcher, violinist and teacher. She was born in Kobe, Japan and grew up in Tokyo and Brisbane (Australia), becoming bilingual in both English and Japanese. She moved to Vancouver, Canada in 2006 and has lived there since. Ai received a PhD in Language Education at the University of British Columbia and has worked as a program coordinator at the Asia-Pacific Cultural Centre for UNESCO in Tokyo and as a researcher for the Japanese Consulate in Vancouver.

Ai is a founding member of the Hikma Collective.

Disclaimer: All views and opinions expressed are those of the authors and do not reflect the official policy or position of any other agency, organization, employer, or company, including but not limited to Hikma.

Stay connected with news and updates!

We will never sell your information, for any reason.

Get updates on our company journey, blog posts and new services.